IF the Appropriations bill passes the full house, (which it likely will, since we have 160 co-sponsors of the ban on horse slaughter) AND the senate adopts the house version of the bill without any more tricks from Pro slaughter legislators, Horse Slaughter will once again be illegal in the US.

We sincerely urge the senate to adopt the house version of the Ag appropriations bill and conduct themselves in alliance with 80% of the American public who are AGAINST horse slaughter according to very recent independent polls.

Thank you to all Horse Advocates who flooded the Committee Members with phone calls and faxes. Horse Advocates are more united and more resolved than ever to protect horses from the brutal exploitation of the horse slaughter industry. We will need a high call and fax volume to the house when the bill is brought onto the House floor, and we will need ten times the volume of calls and faxes when the same bill comes up in the senate or senate committee for a vote.

Thank you once again to our legislator Rep. Jim Moran who’s undying dedication to our American Icons is heroic.

Background on the Moran Amendment:

The Agriculture Appropriations bill, which is the key to having horse slaughter be legal or illegal in the United States, has included the Moran amendment since 2007 when the last of the remaining horse slaughter plants closed in America.

The Moran amendment (offered by Rep. James Moran (D-8-VA)) prohibits USDA inspectors from inspecting horse meat and therefore making it illegal to slaughter a horse for human consumption in the United States.

Late last year, three lawmakers in Washington, D.C. (Rep. Kingston, Sen. Blunt and Sen. Kohl), legalized Horse Slaughter once again in the U.S. by removing the Moran amendment from the Agriculture Appropriations bill when reconciling the house and the senate versions of the bill behind closed doors, sparking an outrage all across America.

Horse Slaughter belongs in the Past. We do not need it, we do not want it,
and we will not stand for it. 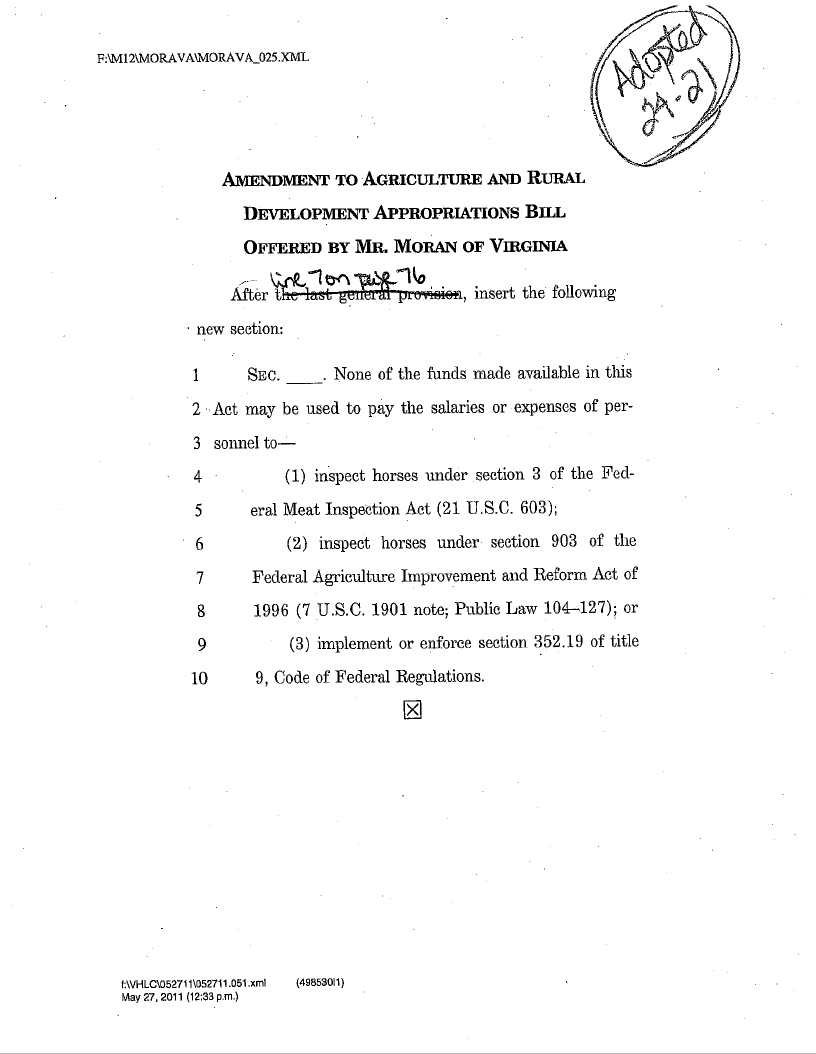 One of our past letters to the House Committee in regards to the Moran Amendment:

Letter to the House of Representatives, June 14th, 2011

Re: Agricultural Appropriations Bill to defund USDA Inspections for Post Mortem Inspections of Horses Slaughtered in the U.S. for Human Consumption to be voted on June 15th, 2011.

We, the undersigned Organizations urge you to consider the following when voting on the Agricultural Appropriations Bill that currently contains Congressman Jim Moran’s Amendment to De-fund USDA Inspections for Post Mortem Inspections of Horses Slaughtered in the U.S. for Human Consumption.

The major market for horse meat from this country is the EU. FDA and EU standards ban Phenylbutazone in all food animals. After 2012 it will require lifetime documentation proving that they have not received a prohibited substance.

Since our American horses are not bred for slaughter, no record is kept of medications they have received and the EU is currently depending on affidavits from their previous owners. Killer buyers come by these horses at auctions where sellers are supposed to fill out the affidavits.

Advocates were able to photograph 23 of these affidavits (called Equine Identification Documents) at the New Holland auction and found none that had been filled out properly. Most had simply been signed and left blank for the kill buyer to fill in. A subsequent report by the EU [Ref. Ares(2011)398056] found that 27 horses had tested positive for prohibited substances and all 27 were carrying falsified affidavits.

Horses that are slaughtered include former pets, riding horses, racehorses, performance horses, wild horses and work horses. Most of them have received the toxic substances like phenylbutazone (bute), de-wormers and inoculations that are not approved and illegal for use in animals intended for human consumption. It clearly states this on the labels of these drugs. Bute is so commonly used in the US that it is sometimes referred to as horse Aspirin.

By allowing American horses to be sent to slaughter, we are encouraging illegal activity and sending a possibly harmful product to other countries for human consumption.

If we were to fund USDA inspection of horse meat, we would put the USDA in charge of verifying eligibility and verifying false documentation in order to keep the banned substances out of the food chain. It will be far more costly than 5 million dollars. It will only benefit foreign corporations and consumers; Americans don’t eat horse meat.

By allowing our American horses who are not bred for slaughter, to be slaughtered anyway, we in fact become responsible for compromising the health of unsuspecting consumers in other countries. The future ramifications of this could be extremely serious.

It is an outright fabrication that the horse industry has been negatively affected because horse slaughter is not available, it is available at every auction in the country and they know that. The horse industry has taken a fall because of the state of the economy and because it has damaged itself through over-breeding, in the same way the housing market and the banking industries damaged themselves by overcrowding the market.

Horse slaughter promotes over breeding and creates the overpopulation problem we have today.

Home builders have stopped building homes, because there is no market for them. While breeding has slowed some in recent years it is still being supported by the slaughter market. Some breeders are responsible breeders breeding for quality all around. However many are not. They can still breed 100 horses, pick out the million dollar winner discarding the rest to slaughter. It’s like buying 100 lottery tickets, cashing in the 5 winning tickets, and getting your money back for the loosing 95 tickets.

We need to slow down breeding until the market balances out again. We need to bring back the population of horses to a population that America can sustain, so that they all can have good homes.

Dear Representative, an overwhelming majority of Americans oppose the slaughter of horses for human consumption for the many obvious reasons, which we have not even mentioned here.

We stand firmly together as Respect4Horses Organization (R4H), Equine Welfare Alliance (EWA), Animal Law Coalition (ALC), Habitat for Horses Advisory Council, (HfHAC), Animal Recovery Mission (ARM), The Cloud Foundation (TCF) and Americans Against Horse Slaughter (AAHS), representing our combined almost one hundred thousand supporters, members and volunteers when we urge you to;
Please vote against any amendment that may be presented on the floor (possibly from Rep.Cynthia Lummis) that would appropriate funds to the USDA to inspect horse meat. Please vote to keep Congressman Moran’s amendment in the language of the bill to keep horse slaughter OUT of the business of the USDA and illegal in the United States of America.